July 23, 2016
Hyderabad.
The second peace symposium of this year was held in Hyderabad on the 23rd of July based on SGI President Ikeda’s Peace Proposal for 2016.

This was the first time that a Peace Symposium was held in the city of Hyderabad.

The symposium was a huge success and was attended by over 200 members, guests & VIPs. The event was held in collaboration with Jawaharlal Nehru Technological University, Hyderabad (JNTU) and the Environment Protection Training and Research Institute (EPTRI).

All the speakers came from different backgrounds and offered a wide spectrum of views on the Peace proposal. They also congratulated BSG for organizing a such an event against the backdrop of mounting violence worldwide

The first speaker was Mr. B. Kalyan Chakravarthy, DG, EPTRI. Mr. Chakravarthy could not come for the symposium due to a last minute exigency. His speech was read by BSG representative. In his speech, he reflected on how the great philosophical truths nurtured in India in ancient times were absent today. He concluded that, “It’s a fascinating story of how a change in peoples’ philosophy can change the future of a state, a nation, and perhaps of a civilization…”. He commended BSG in trying to revive this.

The second speaker Padma Bhushan, Arjuna and Dronacharya awardee and Chief National Coach of the Indian Badminton Team, Pullela Gopichand traced his own spiritual journey. It was a knee injury that prevented him from playing. Pointing out that spiritual truths can come from varied sources, he recalled words of his coach that always ring in his ears, “It’s not how many times you fall but how quickly you get up”. He said that sport teaches respect towards opponent and excellence towards oneself. “No matter which path an individual chooses, respecting the other person is very important”, he concluded.

The third speaker, Ms. Karuna Gopal, Thought Leader on Sustainability and Smart Cities said that it is important to prioritise our goals. For example, if we work on a single goal like the empowerment of women, we would be able to solve so many related problems. “When a woman is empowered, wouldn’t she be able to lead people out of poverty, wouldn’t she be able to make wise decisions, prevent herself and others from communicable diseases? Ms. Gopal also talked about the importance of collaboration and urged the audience to believe in the power of the self, and to be visionaries who can light the path for others. 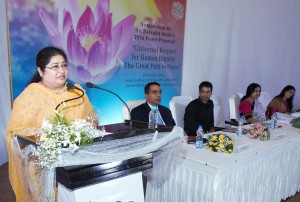 The keynote address was delivered by Ms Shailaja Ramaiyer who spoke about the role of inner transformation in bringing about global peace in a world torn by rage, anger, cruelty and war. She said that asking ourselves questions like what can I do to change this situation, what can I do to bring a change in my life and how can I contribute positively will help us bring about small changes in ourselves. That kind of change will automatically help us bring change in our neighbourhoods, communities, cities and countries. Speaking of the importance of respect, dignity, and positivity, she commended the peace proposal by President Ikeda and also the activities undertaken by BSG.

The welcome address was given by BSG Chairperson Mr. Vishesh Gupta and vote of thanks by Director & Head-External Relations, Ms. Rashi Ahuja.

The symposium was covered extensively by the national and local media. A few media clippings are attached.