Soka Gakkai International (SGI) is a global association of grassroots organisations with more than 12 million members in 192 countries and territories worldwide. The SGI was founded on January 26, 1975 in the island of Guam.

The organizational roots of the SGI date back to 1930 in Japan, when Tsunesaburo Makiguchi (1871-1944) and Josei Toda (1900-58) founded the forerunner of the Soka Gakkai (Society for the Creation of Value). 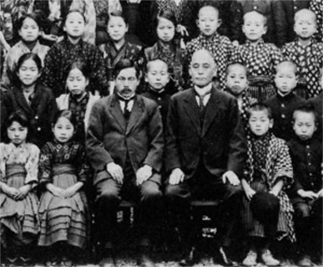 Makiguchi (left) and his pupils [© SGI]

The Soka Gakkai (literally, Society for the Creation of Value) began as a study group of educators started by Tsunesaburo Makiguchi, an author and educator. Makiguchi was passionately dedicated to the reform of the Japanese educational system. His theory of value-creating education is centered on bringing out the unlimited potential of every individual and regards education as the lifelong pursuit of self-awareness, wisdom and development.

The publication of the first volume of Makiguchi’s The System of Value-Creating Pedagogy on November 18, 1930, marked the establishment of the Soka Kyoiku Gakkai, forerunner of the Soka Gakkai. 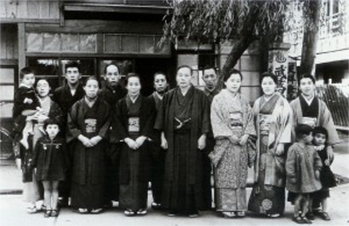 Makiguchi emphasised independent thinking over rote learning and self-motivation over blind obedience. This directly challenged the Japanese authorities of the time, who saw the role of education as moulding docile servants of the state. Led by Makiguchi and his closest associate Josei Toda, the Soka Gakkai grew from being a group dedicated to educational reform into an organization with a membership of several thousand dedicated to promote the values of a humanistic philosophy to reform society.

The 1930s, which had seen the rise of militaristic nationalism in Japan, culminated in the country’s entry into World War II. The militarist government imposed its war ideology on the population as a means of glorifying its aggression, and cracked down on all forms of dissidence. The refusal of Makiguchi and Toda to compromise their beliefs and lend support to the regime led to their arrest and imprisonment in 1943 as “thought criminals.” Due to government suppression during this time, the organization was effectively crushed.

Makiguchi resisted all attempts to persuade him to discard his pacific beliefs and thereby demonstrate support for the militaristic Japanese government. He held fast to his convictions and died of malnutrition in prison in 1944.

Josei Toda was an educator, entrepreneur and publisher, who in his early 20s had found a teaching post at the school where Makiguchi was principal. Toda soon became a close protégé of Makiguchi, and followed him in co-founding the Soka Kyoiku Gakkai, and finally, into prison for standing up to the militarist government. Though his mentor died in prison, Toda was released from prison on July 3, 1945, a few weeks before the war ended.

While in prison, Toda had intensively studied the humanistic philosophy. His efforts brought him to a clear realization of the unlimited potential for goodness inherent in all life, and deepened his confidence that all people could manifest this awakened and empowered life condition through practicing the life philosophy. He emerged from prison with the deep conviction that it was his mission to spread this awareness as widely as possible in order to construct a peaceful world.

Toda set out to rebuild the Soka Kyoiku Gakkai amidst the confusion of postwar Japan and, in 1946 renamed it the Soka Gakkai (Society for the Creation of Value). He promoted an active, socially engaged form of life philosophy as a means of self-empowerment, a way to overcome obstacles in life and tap inner hope, confidence, courage and wisdom.

Toda called for the abolition of nuclear weapons, Yokohama, September 8, 1957.
He used the term Human Revolution whose central is that every individual has the power to overcome life’s inevitable challenges by bringing about a fundamental transformation in the depths of his or her own life. This message resonated especially among people in Japanese society who were reeling under the consequences of war, including poverty, sickness and disenfranchisement. By the time of Toda’s death in 1958, the Soka Gakkai had approximately 750,000 member households. 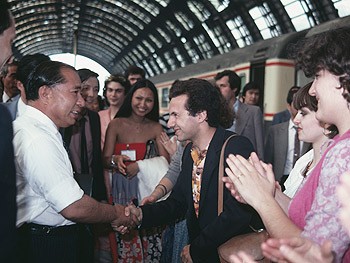 Daisaku Ikeda, a close disciple of Toda, had experienced the horrors of war in his youth. Ikeda had worked closely with Toda for 10 years on the mission to reconstruct the Soka Gakkai. In 1960, Ikeda succeeded Toda as president of the Soka Gakkai.

In 1964, Ikeda began writing his serialized novel, The Human Revolution, which details Toda’s struggles to reconstruct the Soka Gakkai after his release from prison at the end of World War II. It opens with a scathing condemnation of war and militarism that offers a clear context for the movement’s objectives: “Nothing is more barbarous than war. Nothing is more cruel . . . Nothing is more pitiful than a nation being swept along by fools.” Ikeda has often described this and its sequel, The New Human Revolution, as his life’s work.

Under Ikeda’s leadership, the organization in Japan expanded rapidly, reaching a membership of 3 million households in 1962 and approximately 7.5 million in 1970. By this time, Ikeda was convinced that the foundations for the movement had been firmly established; it was also evident to him that an organization of this scale could not function in isolation from society at large. In a speech given on May 3, 1970, he proposed a series of changes that would reorient the organization and its activities.

Education and other secular concerns were a natural focus for the Soka Gakkai given its origins as an organization of educators seeking to promote founding president Makiguchi’s philosophy of value-creating education. In 1967, Ikeda founded Soka High School in Tokyo, followed by a full range of nondenominational educational institutions including Soka University in 1971 and the four-year liberal arts college Soka University of America in 2001.

Ikeda had founded the Min-On Concert Association in 1963 and the Fuji Art Museum in 1973. With the full-fledged launch of peace activities by the youth membership in the 1970s, the three pillars of the organization’s activities—peace, culture, education—were all given concrete form.

The essence of the Gakkai’s practice of Soka humanism under Ikeda’s leadership has been the promotion of the process of fundamental transformation—human revolution—in each individual, with the confidence that this has the power to change society in meaningful and positive ways.

1975 – The Present: Founding of SGI, a global movement 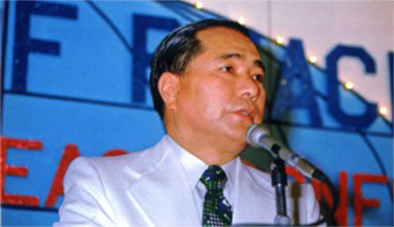 On January 26, 1975, representatives from 51 countries and territories gathered on the island of Guam, where they created an umbrella organization. This became the Soka Gakkai International (SGI), with Daisaku Ikeda as its first president. In his address to the assembled representatives, Ikeda encouraged them to dedicate themselves to altruistic action: “Rather than seeking to bring your own lives to bloom, devote yourselves to planting the seeds of peace throughout the world.”

The SGI movement has developed in countries around the world through the natural interconnections of people. In the course of his travels, Ikeda has always found time to encourage members in the countries he visited. Those locally based practitioners took responsibility for what eventually developed into national SGI organizations. This process is described in depth in Ikeda’s ongoing serialized novel The New Human Revolution.

On May 3, 1960, Daisaku Ikeda was inaugurated as the third president of the Soka Gakkai. He was 32 at the time. Today, the SGI has a membership of around 12 million in more than 192 countries and territories with 90 constituent organizations. Each local organization develops activities independently in line with the traditions of its own society and cultural context. The purposes and principles listed in the SGI Charter include safeguarding fundamental human rights, protection of nature and the environment, promotion of grassroots exchanges and dialogue, social engagement and contribution to society as responsible citizens.